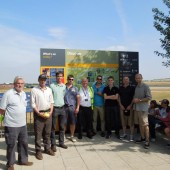 We would like to thank all of those who attended the SFS Summer BBQ, it was a lovely evening and what glorious weather we had. We hope those students and PPL’s who were able to make it found it beneficial to meet other aviation enthusiasts. Thank you again to everyone who came along and helped to make a great event. Photos of the evening can be found on the SFS Flickr page. 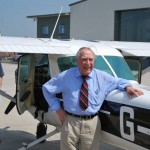 Friends of Ken Plowman’s arranged a trial lesson as a surprise at Staverton Flying School for his 90th birthday. Ken a former Horsa assault glider pilot in 1945 was back at the controls after 50 years of flying! Again with perfect weather and Kim Hampshire guiding the way, they flew for an hour, including aerobatics. His friends were there to greet him when he landed along with journalists. They broadcasted an ecstatic Ken live to BBC Points West lunchtime news. http://www.bbc.co.uk/news/uk-england-gloucestershire-23352043

Ken trained as a fighter pilot on Texans in WWII in Canada and by chance, a T.6 Texan trainer was pulled out of the hangar next door. Ken renewed his acquaintance with the beautiful machine, courtesy of owner David Nock. After Ken’s flight volunteers from the Jet Age Museum presented Ken with a Horsa glider control wheel to commemorate his flight. 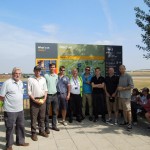 On Sunday 21st July Staverton Flying School organised a trip to Duxford. Kim led a very successful fly away day to Duxford with 9 members of SFS, they reported to all have enjoyed the day and gained valuable experience. More photos can be found on SFS Flickr and Kim’s write-up of the day Duxford 2013.

We would like to congratulate one of our students, Kevin Bennett and his wife Claire on the early arrival of their first child, Noah! 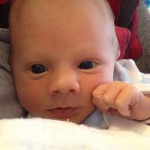 As well as all of this excitement students have been passing their ground exams: