Staverton Flying School got September off to a fine start by holding this year’s barbecue. Members and guests mingled against the backdrop of a gloriously balmy sunset over the airfield, and enjoyed food cooked by our barbecue kings, Steve and Kim. Thank you to all of you who came along to make the evening such a success; photos of the evening can be accessed via our website.

The weather was not so kind to Kim Hampshire, Kirk Daly and Rowland Slatter who made the trip to Duxford for an AOPA Bonus Day at the end of the month. Although the weather prevented them from making the trip by air as planned, they braved the 3-hour car journey to get there and reported having a great day out with some memorable presentations, especially that of Cliff Spink, a retired RAF Air Marshal who has flown a remarkable variety of aircraft during his long and distinguished career and is now a Spitfire display pilot, and who has many amusing and captivating anecdotes to share. 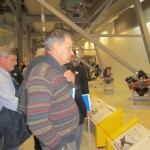 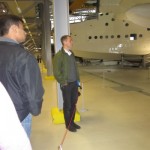 Back at the School, we congratulate our members on the following achievements this month:

We extend a warm welcome to Heli Air as they moved into the Skypark Hangar this month. As with the barbecue, the weather smiled down on Heli Air on Saturday 22nd September as they launched their new Gloucester base with a flourish. The Skypark apron was packed with a number of helicopters throughout their Opening Event and it was great to see so much interest in both fixed wing and rotary aircraft come together in one place.

Looking ahead to October, we are now taking bookings for night flying for any PPLs who are interested in adding a night rating to their licence – book now to make the most of the dark nights.